Prescott, Arizona, is rich with history of poetry and prose that is well-known throughout the world. Probably one of the most beloved of all cowboy poems is that written by Gail I. Gardner, “Tyin’ Knots In The Devil’s Tail” or “Sierry Petes”.

His friend George Phippen, an original member of the Cowboy Artists of America, did an oil painting depicting the tale, and a couple of pencil drawings as well, one of which is shown below.

Another beloved poet who lived in Prescott most of her life was Sharlot M. Hall, for whom the Museum on Gurley Street was named. This was the home of the Arizona Cowboy Poets Gathering for many years. There are dozens of well-known poets in the state of Arizona, and every year at the Gathering in Prescott we present many of them to you in venues that are intimate and enriching. If you’ve never been with us, you don’t know what you’ve been missing! If you’ve been here before, your plans will frequently bring you back for more. 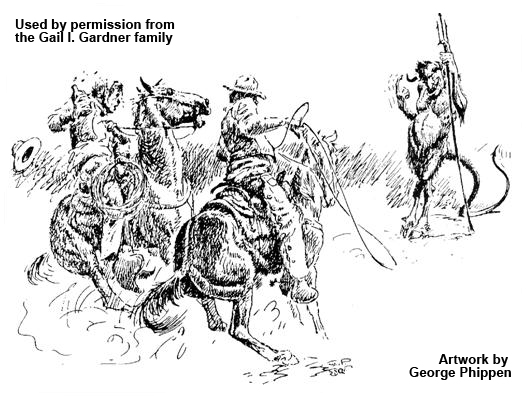 “Tyin’ Knots in the Devils Tail”

Poem by Gail I. Gardner

Away up high in the Sierry Petes where the yeller Jack Pine grows tall
Ol’ Sandy Bob and Buster Jig had a rodeer camp last fall.

Oh, They’d taken their hosses and their runnin’ irons an’ maybe a dog or two
And ‘lowed they’d brand any long eared calves that come within their view.

And any old dogie that flapped long ears, An’ didn’t bush up by day,
Had his long ears whittled an’ his ol’ hide scorched in a most artistic way.

Now, one fine day ol’ Sandy Bob he throwed his seago down
“I’m sick of the smell of burnin’ hair and I low’s I’m a-goin’ to town.”

So they saddles up an’ hits ‘em a lope, ‘fer it weren’t no sight of a ride
And them was the days when a Buckeroo could ‘ile up his insides.

They starts her in at the Kaintucky Bar at the head of Whiskey Row
An’ they winds up down at the Depot House, some forty drinks below.

They then sets up and turns around and goes ‘er the other way
An’ to tell you the Gawd-forsaken truth, them boys got stewed that day!

As they was a-ridin’ back to camp a-packin’ a purty good load
Who should they meet but the Devil hisself just a prancing’ down the road!

Sez he, “You ornery cowboy skunks, you better hunt ‘yer holes!
Fer’ I’ve come up from Hell’s rim rock just to gather in your souls.”

Sez Sandy Bob, “Ol’ Devil be damned . . . we boys is kinda’ tight,
But you ain’t a-gonna’ gather no cowboy souls, without some kind o’ fight!”

So, Sandy Bob punched a hole in his rope, and he swang ‘er straight and true,
An he lapped it onto the Devil’s horns, an’ he taken his dallies too.

Now Buster Jig was a riata man, with his gut-line coiled up neat,
So he shaken her out an’ built him a loop, and he lassed the Devil’s hind feet.

They stretched him out and they tailed him down while the irons was a-gettin’ hot,
They cropped and swaller-forked his yeres, then they branded him up . . . a lot!

They pruned his horns with a de-hornin’ saw an’ they knotted his tail fer a joke,
Then they rid off and left him there, necket to a Black-Jack oak.

Well, if you’re ever up high in the Sierry Petes an’ you hear one Hell of a wail,
You’ll know it’s that Devil a-bellerin’ around about them knots in his tail.

“Buster Jig” in this poem is Gail I. Gardner himself. While Sandy Bob is referring to his friend, “Texas” Bob Heckle. Both these cowboys left tracks all over Yavapai County.  An interesting side-note is that Bob Heckle was the Grandfather of  Marty Robbins, famed country-western singer of the 50’s and 60’s.  Another note;  the line “I’m sick of the smell of burnin’ hair and I low’s I’m goin’ to town” was originally written “I’m sick of this cowpierography and I low’s I’m goin’ to town.”  Gail changed the line himself because so many people didn’t know what he was writing about to cow pyrography.   Pyrography is the art or technique of decorating wood or LEATHER by burning a design on the surface with a heated metallic point. In this context Gail Gardner means BRANDING. The two cowboys are sick and tired of using their “running irons” to “decorate” the hides of the cattle–with brands.